Walking tours in Braamfontein for people interested in graffiti … graffiti festivals … a graffiti gallery … These are the brainchild of Rasty ‘Knayles’, who, if anyone can, may claim the mantle of being Joburg’s “graffiti grandad” — he’s been on the scene for decades, and he’s set up a successful business that caters for those who choose to express themselves out there, in public places.

Grayscale, which provides essential materials for the burgeoning graffiti scene, has been in Braamfontein for 15 years this April. Founder Rasty was familiar with Braamfontein because his mother lectured at Wits in the 1990s, and he also attended Damelin College in Braamfontein for three years. “When it came to choosing a location for Grayscale, we needed to service the whole of Johannesburg, and a central location was preferred. What appealed to us about Braamfontein is that it is not as intimidating and grimy as the CBD, so it’s a nice middle ground.”

In the same building as the Grayscale Store at 33 De Korte Street, is 1933 Classic Tattoos, where Rasty also works (sorry, he’s fully booked till the end of June, says his automatic email reply), and Grayscale Gallery, set up as a platform for young graffiti and ‘outsider’ artists to present their work in a gallery environment, and to reach an audience of graffiti enthusiasts and first-time art buyers.

In 2011 Grayscale founded and hosted South Africa’s first international graffiti art festival, the week-long City of Gold Urban Art Festival, which presented large-scale murals, exhibitions, walking tours, and film screenings; six editions of the festival have been held altogether. Grayscale has evolved and matured alongside the artists, and the Gray Side Project was the logical next step in this progression. It’s a collaboration between Grayscale and Curbside Print House that helps graffiti artists to effectively convey the energy and dynamism of street graffiti onto the white interior walls of a gallery.

In the decade-and-a-half that he’s been running his business, Rasty has seen a lot of changes happen in Braamfontein. A lot of buildings have gone up; most of these are for student accommodation, and more are being built. On the one hand, it’s good to have more people in the area, says Rasty, but on the other hand, he’s worried that the area is becoming “too student-ey”, because students only support certain businesses, such as fast-food takeaways.

The ideal mix for him would be for Braamfontein to have a good mix of students and working professionals; the latter supported independent eateries such as Post and coffee shops like Doubleshot, which moved out with the advent of Covid. To solve this issue, Rasty would like to see developers creating accommodation that suits working professionals as well as students. Luckily there is a new momentum happening in Braamfontein, aided by the opening of the Playground Market, which replaced the Neighbourgoods Market.

Lockdown was “tough” for Grayscale and survival was largely a matter of just hanging on and seeing it through. It was able to reopen after three months of hard lockdown as it qualified as a hardware store, but “there would be days when nobody would come in, because our biggest customers are graffiti artists who do commissioned work, for corporate clients and events, and nothing was happening on that side”. The graffiti supplies store lost more than half of its business, and the tattoo store was even harder hit, although luckily Rasty has a faithful clientele who kept supporting him. Imports were also affected, as Grayscale imports Montana Cans from Germany, and the exchange rate didn’t help either.

Grayscale Gallery exposes a wider audience to graffiti, which is becoming recognised as an art form, “more so overseas than here, but it’s happening slowly”. The local graffiti artists who have been doing it for decades are now becoming acknowledged and are able to charge better prices for their murals. In the last 10 years, tours have begun to take place for people who are interested in graffiti. In the area around Grayscale, there is a high concentration of quality graffiti done by Grayscale’s artists, and Rasty has also organised graffiti artists to come from overseas. “This is why we would like more to be on offer in Braamfontein, so that when these tours take place, once people have seen the graffiti, they can do other things in the area, and this will keep them in Braamfontein.”

Puma's 10-year anniversary of being in Braamfontein has just been celebrated. Th... CLICK TO READ MORE 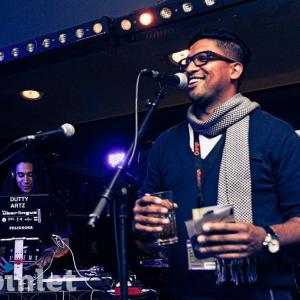